With only a few weeks left until graduation, I’ve been asked “What’s next?” with surprising frequency and consistency over the past couple of months. For most of that time, the question stressed me out and reminded me of the job applications I had floating out there in the world and the impending decision I would have to make once they had settled. I think my response was generally a mix of some sort of barely audible groan and an uncomfortable laugh as I tried to steer the conversation away from the topic.

Now, for the first time, I finally have an answer: something I can say confidently and audibly. And I am beyond thrilled with my choice. Well…thrilled, excited, challenged, terrified, exuberant, and content. And all of these feelings are tangled and tied together. 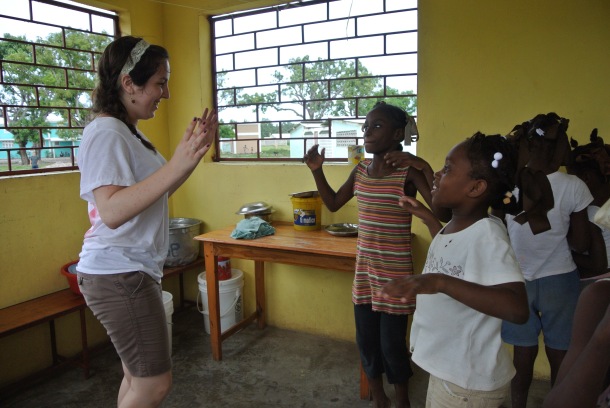 a photo the kids took from our trip last May

I will be spending the next year of my life working at an orphanage in Haiti with one of my close friends as the Guest House Coordinators. We will be orchestrating volunteer schedules and working on projects of our own to benefit the hundreds of kids on site. We will spend our days in the 100+ degree weather, take our malaria pills each night, and work with all of the wonderful people on site to do whatever we can for the kids.

I know that in many ways I am a poster child for liberal arts idealists everywhere. I know how easily this can come across as my ignorant attempt, surely in vane, to save the world with my superior American ideals of freedom and democracy. That is so very far from my intent.

First, I recognize that being an American working in Haiti, raises a slew of questions about what I think I am doing there. That’s something I struggled with when thinking about taking this job and I’ve ultimately decided that by keeping an open mind, not making assumptions, and being aware of my identity as a US citizen, I can help make sure my actions in Haiti are informed. Ultimately, I know I will learn more from the kids at the orphanage than they could possibly learn from me. I am looking forward to the ways that I am sure my world view will change after this year.

Second, I know I am entirely incapable of affecting significant and lasting change from where I sit right now. I do, however, think that whatever tiny help I can be is worthwhile. The orphanage I will be working at likes to tell the starfish story to their volunteers and I think it’s something I will live by for the next year at times when I am frustrated and left feeling meaningless and unsuccessful.

Once upon a time, there was an old man who used to go to the ocean to do his writing. He had a habit of walking on the beach every morning before he began his work. Early one morning, he was walking along the shore after a big storm had passed and found the vast beach littered with starfish as far as the eye could see, stretching in both directions.

Off in the distance, the old man noticed a small boy approaching.  As the boy walked, he paused every so often and as he grew closer, the man could see that he was occasionally bending down to pick up an object and throw it into the sea.  The boy came closer still and the man called out, “Good morning!  May I ask what it is that you are doing?”

The young boy paused, looked up, and replied “Throwing starfish into the ocean. The tide has washed them up onto the beach and they can’t return to the sea by themselves,” the youth replied. “When the sun gets high, they will die, unless I throw them back into the water.”

The old man replied, “But there must be tens of thousands of starfish on this beach. I’m afraid you won’t really be able to make much of a difference.”

The boy bent down, picked up yet another starfish and threw it as far as he could into the ocean. Then he turned, smiled and said, “It made a difference to that one!”

I am currently raising money to cover my travel and medication expenses which will not be covered by the orphanage (although they are graciously covering food and housing as well as providing a small stipend). If you would like to contribute you can donate on my fundraising site here. I’d love to thank you for any contribution you make so make sure you take a look at the various reward levels:

One thought on ““What’s next?” I finally have an answer!”