Today I flew back to Ohio for semester 2 of my Junior Year. My flight got split in two with a short layover in Detriot making the once 1.5 hour flight a total of 3.5 hours. When you add the layover time and car transport to the air travel that’s roughly 6 hours…I can drive to Ohio in 12. Ah, well. It wasn’t too bumpy and there weren’t any crying babies or sneezing seat mates. Perhaps that’s because I was the sneezing seat mate this time around…

On flight numero uno there was an exciting surprise guest. As the plane began to accelerate and the nose lifted into the air, the pressure began to build and from underneath a seat a few rows back you could hear a dull “meow.” Some college student had taken their kitten back on the plane! The kitten was pretty good for the rest of the flight–either asleep or appeased with snacks as far as I can guess.

I slept for much of the 2.5 hour flight and pretty soon we landed in Detriot. The Detriot Airport is pretty cool and I got to walk through the famed colored tunnel to get to my next plane. 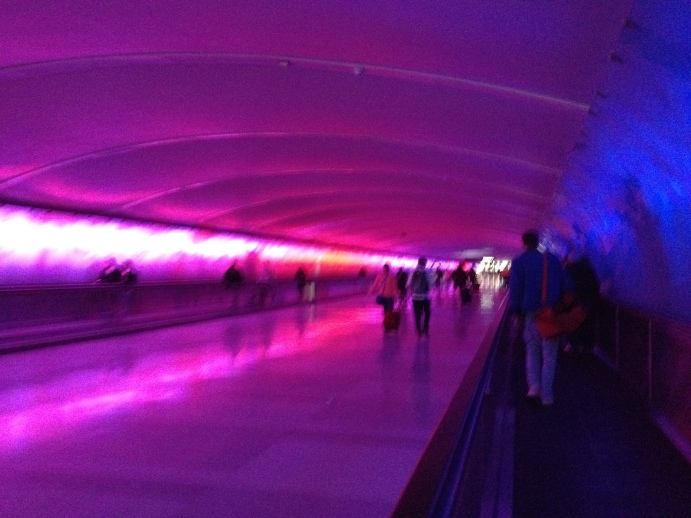 I arrived safely in Ohio after the second flight which seemed to be about 15 minutes rather than an hour. And then journeyed to my car in the long term parking lot.

I have to admit, I was rather nervous that one of my front tires would be flat, the car wouldn’t start and that I’d need to dig myself out of a foot of snow with my hands. As a result of the snow fear, my parents sent me back with a shovel in my luggage so luckily that wasn’t a problem (not to mention all the snow had melted). When I got back to car my other fears proved unfounded and soon I was back on the road to Ohio Wesleyan with my housemate, back from Hawaii!

From one home to another. I’m so happy to be back at Interfaith House and I hope the TSA enjoyed the peak they got at my luggage. I imagine they were a little thrown off by the shovel, teddy bear, and jewelry combination… 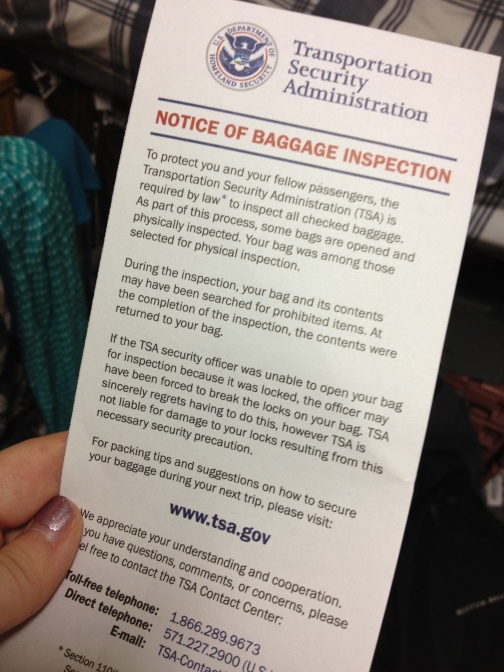 I look at it as a badge of honor. Although I have a sneaking suspicion that they may have confiscated half of three pairs of my earrings and 3 packs of stickers because I simply can’t find them anywhere!

One thought on “From One Home to Another”