My trip to Argentina began in a Sociology class last semester. We were studying alternative economic structures to capitalism (I know, you’ve already written me off as a communist at this point but try–if you can stomach it–to keep reading). The class was titled “Economic Social Justice from Below” and our main case study was the recuperated factories in Argentina.

In 2001, after several years of neoliberal policies that favored a free market and supported private business, the economy collapsed in Argentina almost overnight. Unemployment reached about 20%. Thousands of people were fired from their jobs and many bosses left their companies entirely putting whole factories out of work.

The recuperated factories we studied were mostly built by workers of necessity. Their bosses had left, and unemployed with no other alternative, many workers decided to occupy their factories and go back to doing what they already knew how to do without a boss. Most of these factories took a cooperative structure. Decisions would now be made jointly by an assembly of all the workers, no boss would be reinstated, all workers’ wages/hour would be equal, and they would decide cooperatively what to do with any extra profits. 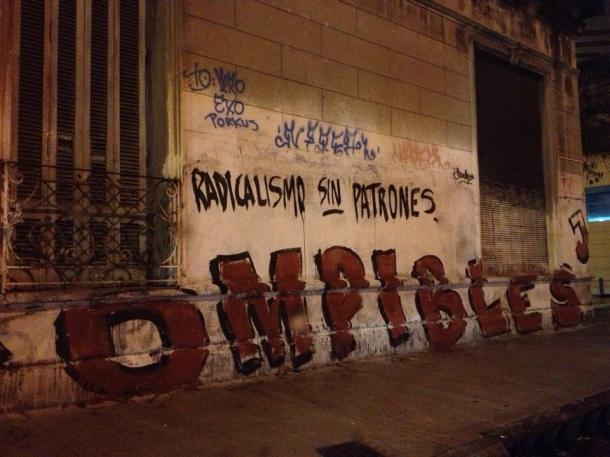 The graffiti reads, “Radicalism without bosses.”

This cooperative model seems so unlikely to develop in the United States for so many reasons. And I know, just from being home for one week, that it sounds ridiculous and “communist” to most of the people I’ve told about the trip. I’m convinced, that if working class Americans could meet these working class Argentinians they might see things differently. I know that wish, in itself, is also unlikely. So, instead, I’ll leave you with one thought that struck me most while visiting these factories.

In America, and in a capitalist economic model, we are taught that happiness is tied to success. We know that when a person climbs the ladder in their desired field and makes a lot of money, they are successful. We think: that person must be so happy in their job, their family must be so proud, they are so lucky to have all of those cars, those boats, those fancy rooms in their home. They must be truly happy. (editor’s note: I am exaggerating here, but you get the idea. Climbing the ladder leads to success which leads to happiness).

UST Workers spending time together, playing music for us, after lunch.

The workers at these companies challenged me to change my definition of success and happiness. I remember in particular a cooperative called UST. One of the workers talked about his own definition of happiness shifting as their company adopted the cooperative model following the 2001 crisis.

“I realized success wasn’t about making money and having things. I am not most happy that way. I am most happy when I can work with my friends and spend time with my family. I would much rather live like that.”

That’s what I’ve been waiting to hear someone say for 22 years, it feels like.

I know, I’m an idealistic college graduate. I’m used to living in a wonderfully creative, accepting, aware, and politically-active environment and thinking about these things. I know that you’ll take what I say with a grain of salt, that’s probably good. But having someone in Argentina confirm to some part of me that it’s okay to define success and happiness differently than I see it defined around me was refreshing. It’s really important to me, right now, in this moment, to not focus on climbing a ladder. At this moment in my life that’s not how I define success or happiness. Maybe I will someday. Maybe when I have more responsibilities and a family to take care of, things will change. But I hope they won’t. I hope that years from now when I have a steady job somewhere (or I don’t) that I can echo back the words that I heard in Argentina.

I hope I can say that I am happy because I spent my time working with friends, that I enjoyed time with my family and that I count myself among the successful ones. I have a sneaking suspicion that when they take the time to think about it, many Americans even within the capitalist structure, feel the same way. I don’t think this is necessarily unique to the recuperated factories in Argentina, but it took a 13 hour flight for the idea to really sink in. 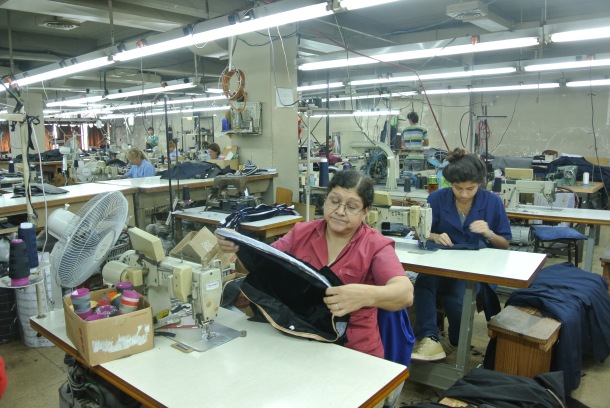 Brukman: another recuperated factory we visited. (Click the picture for more info).