Three days a week this summer, the kids filed diligently into the secondary schools for English classes. A line of students from the girl’s village and a line from the boy’s village met at the school with fading blue paint. In each classroom one of the older boys taught the students–pointing to the board and having them repeat the words there through rote memorization–a traditional French education. Taking turns, each student stood up to demonstrate what they had or hadn’t memorized in front of the class of their peers. 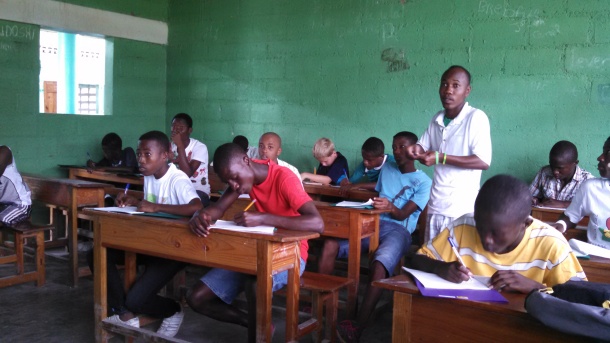 One day, the subject was “body parts.” Another, “basic conversation.” Another, “commands.”

Peeking into the classroom on “command” day, you would see the following written out in careful chalk lettering.

Only the final command would seem out of place to a foreigner as the kids played “Simon Says” with the new words. To the kids, it made the most sense of any on the list. Even at a fairly progressive school like Espwa, where punishments for acting out tend to be verbal, this physical vestige of the French education system had slipped through.

Most days walking by English classes you’d see the kids who had misbehaved kneeling with their bare knees against the hard concrete in front of the principles desk, waiting for classes to finish. 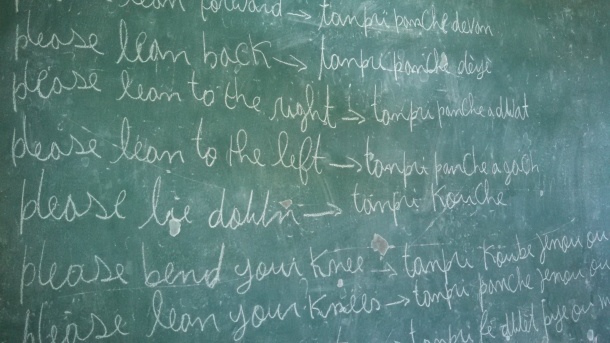 Actually much of Haitian schooling still reflects the French standards of the colonizers. Kids are expected to sit quietly, well-behaved, and learn through rote memorization. They are then rigorously tested through state exams. Take just a second to imagine you’re preparing for your yearly state exams in Haiti:

A couple of weeks later, the scores will be released online and at the testing centers. Everyone will learn your score, including your parents and your peers. If you don’t pass it could mean another year in the same grade, everyone will know. You will have to pay for another year of schooling. Students are crushed when this happens. In the rare chance that you very nearly pass, you may get a qualifying score which allows you to retake the sections of the exam you failed just a couple of weeks after the scores are released. If you fail again, though, you look forward to another year of the same.

This week, the students with qualifying scores are retaking the exams. We’ve seen them with their noses in their books for the past two weeks, rarely taking breaks for time with friends or relaxation. Each day they dress in their uniforms and head into town with their notebooks under arm. If they ever want to go to university in Haiti they will need to pass the exams up through filo (similar to an associate’s degree).

We wish them all the luck in the world as our friends go off to take their tests each day. There are some things to be addressed in the education system here, that’s for sure. All of this, without mentioning that 21.5% of the population over age 5 receives an education at all. And, if they do, they likely attend one of the 90% of non-public schools run by NGOs or community organizations with little help from the state. As it is, things have yet to change.

One thought on “Back to School”