Last night Anthony Bourdain passed on. The monster of depression devoured another incredible soul from our fragile world. This morning, I read the reactions of people around the world grappling with the loss of this man and the intimate connections many of us felt with him although we never had the chance to sit across the table.

In the past 48 hours, powerful articles have been written about Bourdain’s depression, his death, and how to be there for friends in your life who are struggling. If you haven’t read those articles, I recommend them. They’re important. So is celebrating his life, I think, and I’ve been spending some time considering what is so inspiring to me about Bourdain.

I think the thing I most admire about him was his bold willingness to be himself and embrace the people and places around him. He wasn’t afraid to fail, to be proven wrong, to be pushed off track and to grow from the experience. He believed that travel should change us and that we should be open to it. He once wrote,

“I’m a big believer that you’re never going to find a perfect city travel experience or the perfect meal without a constant willingness to experience a bad one.”

As I process Bourdain’s death from Bangkok—a place that I first saw through his eyes—I feel compelled to take my own action in a kind of personal recognition of his life.

Bourdain tried to be fully present in the world with the people around him and he loved to write about it. He wrote daily and did not let anything stop him: not lack of time and not worrying about how he would be received. His unapologetic way of moving through life and writing is something I have struggled with the past few years.

For a while I told myself it’s because I’m too concerned with what people think. That is part of it. I don’t claim to be as fearless as Bourdain in that respect, though I am working on it. What I have been reluctant to consider is that my lapse in publicly sharing my writing is also a function of time. I write nearly every day—in my journal, in pen-and-paper letters, in emails, in hastily typed articles saved and forgotten on my computer—but I don’t make time to edit and share my words anymore. And often I don’t leave myself space in the day to foster creativity. Not today. Today, I made time.

A couple of weeks ago I crammed into a run-down taxi with a group of other interns headed to the airport. Our driver was from Bangkok. He was an older guy who had lived in California for a number of years as a housekeeper and as we got on the highway we started chatting. He asked us where we were from and smiled and exclaimed some fact he knew about each of our home countries. Scotland. “Oh! Good whiskey!” U.S. “Trump!” (That’s another story. It was lovely to travel when people’s first thought was Obama, now the immediate association with the U.S. is bigotry, a come-over, and divisiveness.) We were having a nice time getting to know this man, laughing together, and were quite pleased with ourselves that he was charging us a metered fare and not an inflated flat rate.

Then, things started to turn.

“The car is overheating,” he said, pointing to the indicator on the dashboard. “I will need to pull over and pour some water in.”

Fine, no problem. We might get to the airport a little later than expected, but dear god if the engine is overheating let’s get out of the car immediately. The problem is, we were on a congested highway with few options for exit. When he passed the first exit and the dial continued to climb, we asked him to pull over at the next. After a total of three missed exits, smoke started pouring into the car through the vents and we became more insistent. That’s an understatement. We were freaking out. I was picturing the car bursting into flames and a pile of us diving onto the highway like an action movie explosion.

It was tense. There was shouting. First us, then him. When he finally pulled over, we leapt out of the seats like our butts were on fire. I’ve never seen people exit a vehicle so quickly.

It’s natural to shout in western culture when you’re scared and feel threatened. Where I grew up, it would be an appropriate response to the situation. To say it is discouraged to shout in Thai culture is putting it mildly. We scared the man and probably offended him too. We insinuated he didn’t know his car and he was putting us in danger and that hurt him. We apologized and explained that we weren’t angry, we were just scared. A couple of the girls took extra effort to be sure we understood each other as he poured water into the engine which responding in turn by coughing out flames.

As soon as we arrived at the airport (in a new taxi) I once again leapt out. I was traveling solo to Viet Nam and the rest of the group had a little more time before their flight to Chiang Mai.

After the obstacles getting to the airport, it was a miracle I made it to the gate with any time to spare, but I did. I used my ten precious minutes to buy myself a fresh mango with warm sticky rice and take a seat at my gate. Feet throbbing, shoulders finally unclenched, taking the first spoonful of my absolute favorite Thai dessert, I was washed over with gratitude. I will never know how close the engine was to overheating, but that mango was the sweetest I have ever tasted. Everything about being in that moment felt like a gift.

At the end of yoga practice before you go into savasana (or corpse pose, which is exactly what it sounds like), you clench the muscles all over your body to create opposing tension. When you release your body after being that tense, you appreciate relaxation on another level. That feeling of deep appreciation is reason enough to live boldly, to risk being uncomfortable. The “bad” experiences tend to heighten the good ones. What’s more, is that the unexpected also leads to growth. It is a fine line to walk between safety and culture. On the ride to airport, we jumped right off that line, and it had some consequences. The growth part comes not just in my own understanding of the world, but from someone else’s.

The practice of showing up, knowing things may not go our way, is ultimately what instigates the most interesting events of our lives. Bourdain has given that advice time and again: “show up.” He showed up every day as a line cook, he showed up in the places he traveled to, and he showed up as a writer.

I hope to do some of the same. I like to write too. I enjoy the process of editing, and sharing, and having conversations with people who exchange their own stories and insights. In addition to practicing mindfulness in each moment, I’m going to start showing up to my writing again, in the spirit of Bourdain. 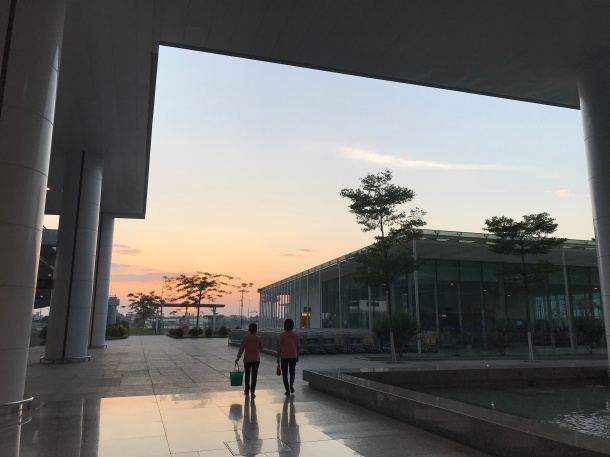