I fanaticize about this woman who is both empowered and safe in the world. She’s independent. When she sets her sights on something, she confidently follows through. She brings other women with her, they support each other. The woman doesn’t compromise on her principles. She’s unafraid to stand up for herself and others. She understands the gendered societal expectations of her time and place and gracefully navigates her surroundings without compromising safety or her values.

Wouldn’t it be nice to live as an ethical feminist without having to take much risk to your wellbeing?

Sure it would. The fact is, though, that you can’t really have it both ways. Trying to be an empowered person in societies that have designed neat boxes containing all that’s acceptable for men and women (not to mention those who identify as another gender), means that when you are living your life honestly you are going against what society has deemed “your place” at least some of the time.

We all deal with this in different incarnations throughout our lives. For me, the internal negotiation between safety and empowered feminism comes into clearer focus outside of my home country. Probably because I’ve gotten so used to the negotiation in the U.S., I don’t notice I’m doing it anymore.

I spent a lot of time when I was living in India struggling with this idea, especially in the aftermath of a number of events in which women (Indian and international) were assaulted, violated, and killed for their presence in public spaces. I did not want fear, incubated by sexism, to dictate my experience. At the same time, I was a little afraid, and I knew I could fit myself into my neat box for the most part if I wanted to: always take public transit with others, always be home before dark, make myself quiet and small when walking down the street, not invite male attention with my eyes.

My familiarity with my box also meant I could choose to purposefully exit it when I wanted. I did take rickshaws by myself. I stayed out into the night once in a while. I think I may have even been loud walking down the street with friends and probably looked at a man or two by accident in an effort not to trip over my own feet or uneven sidewalks. I selectively chose empowerment in those moments and in doing so, I compromised a little bit of my safety.

In the past month in Bangkok, I have been thinking about this again. In my time here so far, I have made similar calculated choices and perhaps some ignorant ones.

When I landed in Bangkok, it was midnight. I had thoroughly researched and planned how I would get to my apartment by using the public taxi system. I had the directions printed out in Thai, I exchanged money right when I landed, and I confirmed with friends who had lived here before I left that my expectations were reasonable. It was a calculated decision to position myself outside of my box.

As non-Thai, non-Thai-speaking woman, I got into a taxi in a city I had never been to with all of my important possessions on my person. In the car, we whipped past billboards plastered with larger than life images of male hands wrapped around young girls’ mouths and phone numbers to call to report sex trafficking. In my jet-lagged fogginess, I took a picture of the taxi number of the car in case I needed it later. I tried to memorize a handful of landmarks as we passed in case I need to retrace my steps later. Thankfully I didn’t need the picture or the mental map I had created. The drive was pleasant and the driver waited patiently for me while I fumbled with the lock box to get my key. I compromised a little bit of control over my safety for that independence and it happened to pay off.

I walk all over the place by myself too and sometimes after dark. The unspoken rules are not the same here as they were in Pune. I see many other women walking around by themselves. They don’t all dress conservatively and I don’t have to police my gaze in the same way. In Thailand, there’s a different expectation. Instead of keeping my head down, I smile at the people I walk past. That’s how I stay in my box here.

I don’t mean to make it sound like everything in a box is bad. In this particular case it isn’t for me. I like smiling at people. I’ve become a bit of a Midwesterner in the way. In this case, what is contained in the box is not necessarily bad itself, it is the societal punishment for stepping outside that is a problem. In a perfect world, we could choose to smile or not smile at our pleasure without a recognizable response from the outside world. We’re not there yet. Until that day, the negotiations continue. I can’t be the empowered and safe woman because she doesn’t exist. But I can continue to live my life in a way I can be proud of somewhere between.

It’s important for me to remember I am far from alone in this. The expectations are different for each of us and they depend on much more than just our gender, but I find great comfort in sharing experiences and supporting one another as we navigate onward. When I am with other women, we can garner some extra safety and boldness from each other. I am incredibly grateful for these women and those moments when we  live our lives like the illusive woman: empowered and safe. Objectively I know she doesn’t exist, but part of me also knows that every once in a while she’s us. 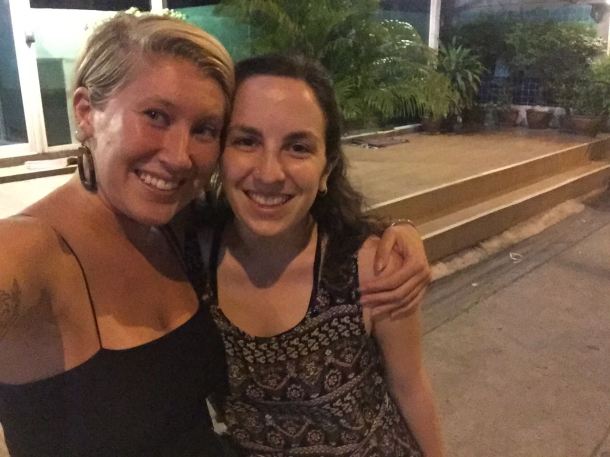