Today we took a bus tour to three places around London; Windsor Castle (where the Queen takes holiday), the Roman Baths in Bath, and Stonehenge.

WINDSOR CASTLE: The castle was beautiful, another castle built by William the Conqueror in the 11th century and built upon by many monarchs after that. It is actually the castle with the longest continuous use by monarchs in England. St. George’s Cathedral was the first place that we visited within the castle walls and I got to see Katherine of Aragon’s book, as well as the intended plan for Henry VIII’s grave and the place where he was actually buried with Jane Seymour (his third wife who gave him a son). There were a few other kings buried in there as well and some lovely architecture and stained glass windows. Then we went to see the Princess Mary’s huge dollhouse as well as the Royal Apartments which was like walking through the rooms of the castle. Everything was very grandiose and certainly not something I’d ever seen before.

BATH: Next we drove two hours to Bath which is down in a valley. It was one of the city’s greatly influenced by the Roman conquest of Britain so there are Roman Baths there. We went to visit the Baths and learned quite a bit about the history. It’s amazing that a lot of it is still in tact and that the hot springs remain at a constant temperature of 115 degrees Fahrenheit throughout the year just based on what is naturally coming out of the ground. We also visited the cathedral in Bath which was lovely. The town itself was beautiful and the entire ride to the Roman Baths was down hill with small houses close to one another.

STONEHENGE: Last we drove to Stonehenge where we got to see the ruins. It was really cool to see something in person that I’d always heard about but there’s not too much to say about it because I didn’t buy a book at this stop so I have no historical facts to share with you. The countryside was very nice too!

We got back to the hotel at about 8…that’s an 11 hour tour day and ate dinner in the hotel. Tonight I’m going to bed early as we’re visiting Buckingham Palace and Westminster Abbey tomorrow.

ALSO fun fact about British people…they are incredibly well dressed. They don’t wear jeans and t-shirts often and they always look nice and put together. I’ve noticed that the women wear a lot of floral dresses and cardigans as well as awesome military boots. (Although usually not all together). Ok, so there’s my tangent for today. Goodnight! 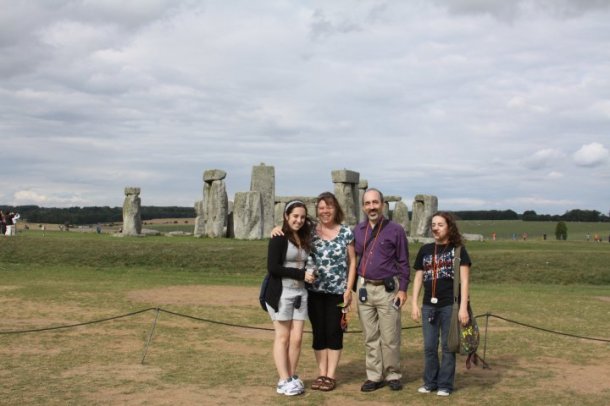