Here at Espwa, the kids have been watching the World Cup games everyday. They huddle around a tiny tan television on a stool by the dozens to catch glimpses of the matches. All throughout the day you can hear cheers across the property–especially when Brazil scores. It’s an exciting time of year and unifying for the hundreds of students here who love the game and the competition. 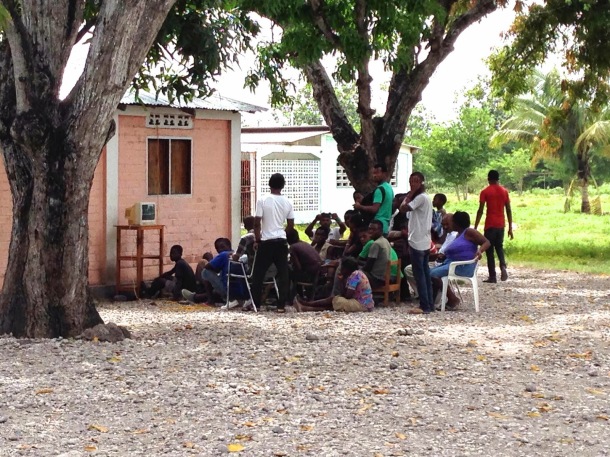 The Haitian government and electricity provider (EDH) knows that too. They know that everyone in Haiti wants to watch the World Cup and they try to accommodate that. This means, if there is a big game coming up on Friday, the electricity might be turned off for the whole country on Thursday night so everyone will be able to watch the next day. Sports can be kind of incredible like that around the world I think. They can be divisive I know (growing up with the Red Sox/Yankees rivalry, how could I forget?) but much of the time I think they are a force that brings people together. And in that sense, it’s rather spectacular to imagine that all over this country diverse groups of Haitians are watching the same matches with equal fervor.

But the story isn’t that simple. It also happens to be exam season. Haitian kids all over the country are taking their state exams this month to qualify for the next grade. If they don’t pass just one of the multiple exams they have to take this week, they will be held back for the following year: never mind if they have had enough food to eat the night before, a fight within their family, or the ability to get to the testing center on that day.

Because the World Cup falls on the same schedule as the exams, this also means that kids across the country are often forced to study without electricity on the nights leading up to these exams that determine the future of their education. Maybe some can afford to study by candlelight or use a backup generator, but many cannot.

In some ways I think the idea of all Haitians watching the World Cup together is wonderful, joyful and unifying. But there are many sides to the story. I imagine many of the students preparing for exams might not appreciate the sudden plunge into darkness.