“Bear, bear, bear!” I had shouted at my sister earlier that weekend as she unceremoniously dumped orange remains from the cutting board onto the dirt at our camp site.

The English language failing me, it was all I could instinctively verbalize. She rolled her eyes, kicking dirt over the spot where the smelly bear snack lay, “Better?”

The campsite bathrooms contained standard wildlife warnings. Pasted to the right of each bathroom mirror, green sheets explained: black bears are not dangerous and are generally docile but here are some tips when confronted…

Having never faced a bear in our 20 years of camping, we glazed over the details.

It wasn’t until dinner that night, we wished we had looked more closely.

“Bear, bear, bear!” Paige whispered from inside the screen tent. She dropped the knife she had been using to cut chicken, eyes fixed directly ahead of her. From our seats around the fire we followed her gaze and saw…nothing.

“It’s behind me!” she whispered again.

Sure enough, a baby black bear had made his way onto our site. After quickly assessing the safety of the situation, I snapped a few pictures with my iPhone and ran for the closest car.

“We have to make noise to scare it off,” I instructed from a safe distance, leaving the dangerous work to the professionals. (They teach this stuff in “dad training.”) 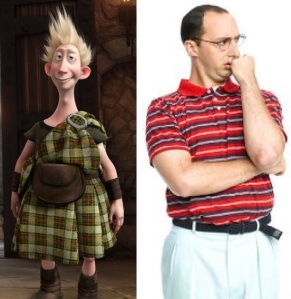 When baby bear returned in less than 15 minutes, we called in for backup: backup named “Bucky the Ranger.” A combination of Buster (Arrested Development) and Wee Dingwall (Brave), Bucky didn’t offer much help.

“He’s just a little guy,” he said, as if that would save our food from inevitable consumption. “He looks about 25 pounds, he won’t cause you much trouble. Just…uh…give another call if he comes back and we’ll bring the firecracker gun to scare him off.”

First off, there is no way he was 25 pounds, a 2-year-old child weighs 25 pounds, not a bear. Second–we had food–he’d be back. So when Bucky retreated into the distance, we wildly speculated about how to deal with the bear without him. Not having read the green sign in the bathroom, it went something like this:

As it turns out, marking your territory and running downhill aren’t such bad ideas. But I strongly advise against scaling a tree, I guarantee the bear can climb faster than you and you’ll regret your decision before hitting the first branch.

We ultimately settled for option #3 and averted our eyes as the dads made use of another lesson from “dad training.”

This did the trick and baby bear did not venture back. But just to be sure, we bear-proofed our tent by stowing toothpaste in the car that night.

As it turns out, a mother bear was killed in the road by our site a few weeks before and the rangers believed this little cub belonged to her. It was too soon to transport him to a less populated area because he hadn’t yet learned to hunt. And the best they could hope was that, surrounded by easily-accessible camp meals, he would nevertheless develop the skill.

So, the next time a bear comes to dinner remember he’s probably got a traumatic back-story and has to learn to fend for himself. So even though he’s absolutely adorable: do not approach and do not feed.

Don’t forget to try your hand at this whole “yeah write thing.” It’s the last weekly challenge of the summer and the prizes are stellar! Why not hop on over and take a look?

42 thoughts on “An Unexpected Guest: how to behave when a bear comes to dinner”