The past weekend was a wonderful triad of experiences in nature. Each distinct, yet harmonious together. As summer transitions to fall, the outdoors were calling to be recognized. Sun and moon shine, day and night. For whatever reason, this weekend felt important and left me with an overwhelming sense of gratitude for the place I am in and the people I am with.

On Friday night, I had the incredible opportunity to perform with Ignite Entertainment at Diner en Blanc in Pittsburgh. The event that began in Paris in 1988 has turned into an international pop-up gathering in which the location is revealed to guests just moments before the event begins. On Friday, people from all over the city arrived in downtown Pittsburgh along the river, head to toe in white attire, and our group provided ambiance and entertainment throughout the evening dressed in 1920s flappers and dapper suits. 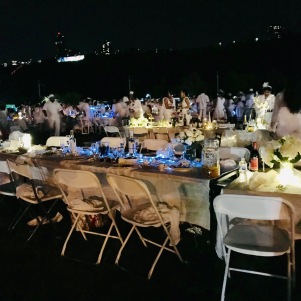 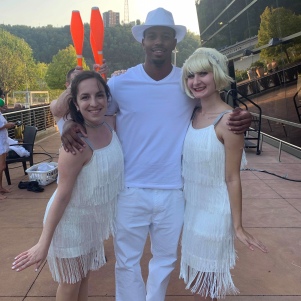 As the sun set, the show came to a climax with the fire performers in the group and guests got up to dance under the full moon illuminating the brilliant white flowers, centerpieces, and china on the tables. It is a special blessing to perform with a group like that and to make new friends and connect with them so immediately. Something about the transient nature of the event itself, the fun of dancing with others, and a couple thousand strangers coming together for one night to enjoy one another’s company, good food and drink, and the city.

On Saturday morning, after a few hours of sleep, I woke up and met old and new friends to go floating on the Youghiogheny River.  We drove south along the Allegheny and ended up somewhere on the banks of the Yough where they set us up with canoes and kayaks to float downstream. After we each pushed off, we bunjeed the boats together to float down the river as a kind of makeshift barge.

We were on the water, surrounded by trees, bathed in warm sunlight for nearly six hours snacking, drinking, and listening to music.

Shakespeare in the Park 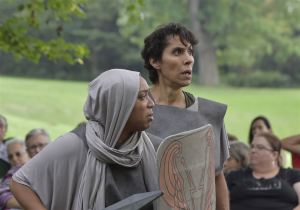 I finished out the weekend with friends watching an all-female production of Julius Caesar for Pittsburgh’s 15th year of Shakespeare in the Park. The performance was incredible. They managed to condense the play into 90-minutes and hold an audience of small children, dogs, and tired students rapt attention for the entirety.

We watched the performance, huddled in a clearing between the trees in Highland Park. The irony/excellence of an all-female cast performing something that would have originally been entirely male in Shakespearean England lingered. Also serenely, subtlety present were the trees surrounding us, performers themselves, that have been in that place perhaps even longer than the life of the play has existed.

“This is not our world with trees in it. It’s a world of trees, where humans have just arrived.” -Richard Powers, The Overstory

What a great pleasure to be here in Pittsburgh in each of these moments. To spend time outside. To release expectations. To connect with other people and with our environment that so quietly watches and exchanges with us as we come and go though we often do little in return.