If you follow The Penniless Traveler on facebook, you already know that I traveled “Around the World in NYC” on Friday night. Accompanied by Jules Verne’s eccentric cast of characters in a small, Off-Broadway Theater on 45th street, I traveled from England to India to San Francisco and back again.

New York City in and of itself is a microcosm of the world, so what better place to go on an imaginary journey around it? In the city itself you can walk the streets of Little Italy, wander the markets of Chinatown, listen as Indian music wafts out from store fronts and feast on Thai delicacies, English ales and French cheeses.

So when I noticed that “Around the World in 80 Days” by Mark Brown was playing just a few blocks from our hotel, I strongly advised the rest of my family to get onboard with the idea.

And that’s how we found ourselves approaching the theater Friday night. Stationed next to a parking garage, the theater is nothing special from the outside, the dark facade barely calls any attention to itself on an otherwise residential street. We probably wouldn’t have noticed it at all if it hadn’t been for the top hat and eyes staring out at us from the show poster. Pushing through the metal doors we entered a lobby no bigger than our kitchen at home and at half past seven, the doors to the theater were opened. 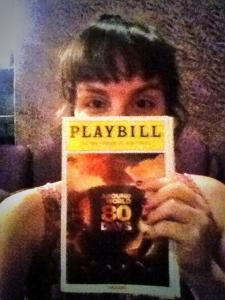 Playbill in hand we greedily devoured the visual candy that surrounded us. The theater hummed with the sound of the industrial revolution and steam-punk inspired gears slowly rotated on the walls in clear view of a glowing clock overlooking the whole spectacle. The theater itself was as narrow as a railcar and not much longer than one. The four of us had an entire row to ourselves in the very back of the room, but couldn’t have been more than 30 feet from the actors onstage.

We settled into purple cushions, reupholstered for the show to match the drapes onstage and looked at the precisely painted murals on either side of us. To the right we overlooked a clear blue sky with a lone zeppelin floating in the breeze, on our left the makings of a Victorian inventor.

The lights dimmed and the sound of a locomotive filled the theater with the rumble of surround sound speakers and we were off on a two-hour adventure after Phineas Fogg–a man who decides to travel around the world in 80 days on a bar bet. 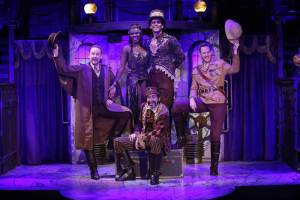 The familiar story is reimagined and given new life by director Rachel Klein. A combination of immaculately choreographed physical comedy, fast-paced witty dialogue and a cast of five playing the parts of 30 I was beaming the entire time. From the elephant made out of strips of gray linen to the train recreated with spinning parasols as wheels, I believed every moment of it.

A fantastical journey around the world you cannot pass up. I would recommend this show to anyone who still feels a child-like sense of wonder jumping around inside of them. You get a near Broadway-quality show for the price of some cheap local production your uncle played a minor role in and you fell asleep during.

The show does homage to Verne himself who writes in the original novel, “Anything one man can imagine, other men can make real.”

5 thoughts on “Around the World This Week: A Quick Visit Off-Broadway”